A little story inspired by my preschoolers- they love saying the word bananapants then giggling. This is one of the things I was hoping to get out of being a preschool teacher. These kids rock at being kids.
Captain Banana Pants and the Missing Toilet Mystery

"HELLLLPP!" Little Missy Mulligan shouted out of her bedroom door. "Hellllp!"
"HARK! What is that I hear?" A hero said to himself. " Could that be a friend in trouble?! I am... CAPTAIN BANANA PANTS! and I will save the day!"
Captain Banana Pants sailed his ship up to Missy's bedroom door.
"Do not worry! Do not fear! Captain Banana Pants will always be here!"
"Oh Captain! Thank goodness you came!" Missy was jumping up and down as she spoke. "I have to go to the bathroom... but, I can't find the toilet!"
"Oh my!" exclaimed the Captain," That sure IS a problem!"
"Oh where oh where could my toilet be?"
"What places have you looked?" asked Captain Banana Pants.
Missy had a very long list of places that she had looked. She looked under the bed, there was no toilet there. She looked in the refridgerator, there was no toilet there. She looked up in the tree house, and under the car. She looked behind the kitties, and in the big cookie jar. Missy checked in the toy box, and she checked all of her books, she even gave every television channel a look.
Her toilet was nowhere to be found!
"Hmmmm.... Captain Banana Pants tapped on his chin as he thought very very hard.
Where could the toilet be?!
"AH HA!" Captain Banana Pants pointed his finger into the air. "THE BATHROOM!"
"Ohhhh yeah!" said Missy. " The bathroom!"
Missy hurried to the bathroom as fast as she could, without running. She was in the house after all!
Another day, another problem solved! Captain Banana pants patted himself on the back and hopped aboard his ship to sail to his own bathroom, shouting as he drove away...
"DON'T FORGET TO FLUSH!"
The End.
(cue toilet flushing sound)
Here's a few little sketches I did of what the captain might look like (and Missy)
I don't want the captain to be either a boy or girl- so it's going to be yellow. 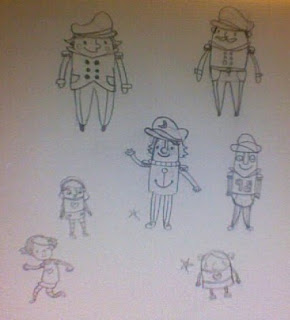 Tonight I swapped out the boston shaker for an olive on a tooth pick, and swapped the colors a bit. I like o in inebriations being an olive!

I colorized the logo I've been working on this evening. There's something funny to me about his upper hand- it's almost hard to tell what he's holding. I'm going to turn what's supposed to be a boston shaker, into an olive on a tooth pick- so it looks like the guys finishing making a martini!
Here's this version for now- then I'm back to drawing.

Justin and some of his friends have been working on making a web series about drink making- and I started making a logo for them. Here's a few of the sketches! 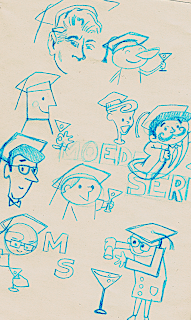 The show's called Higher Inebriations, so the concepy is a scholar making drinks. I used the 'Krazy Kids Food' book for inspiration- it's a great book.
Justin made a good point about how the character shouldn't look like a kid. Since, he's making drinks :) That was a good call. Note the second person up on the left- If he looks like Dennis' the Menaces' dad, that's cause it is! I used that for help it making it look more like Justin. Except his nose isn't quite as long... Here's a sketch I came up with after those ones, I was happy with it.

My friend Jacqui is taking graphic design classes and I hopped onto her homework train :) I miss going to school- at least, the art homework part.
Her assignment was to make a label for a bottle of tea. Once she finishes hers and posts it, I'll add a link!
Introducing... MonstrosiTEA! It's an energy drink! It's Tea! It's ORGANIC!
That's right, organic taurine.
Don't question.

Swell Artists (and my page too)