The Krampus: the puppet 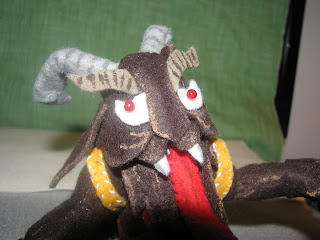 I decided to turn my drawing of the krampus into a stop motion puppet. It worked out rather well considering I used things I already had! First I made a wire frame of the body (I didn't take a picture of that, so here's the frame for my next puppet, Santa). 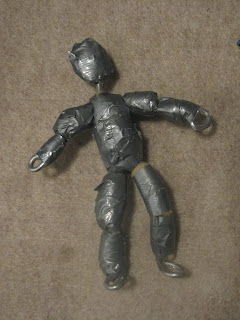 The silvery stuff covering the wire frame is duct tape. I used furniture foam (you can get it at most craft stores that sell fabric), and taped bits of it to where the sections of muscle groups would be. Well, simplified sections.
If you look at the feet, they're loops of the wire so that when it's all done it can stand up on it's own by being tied down to the surface I'm going to animate on.

This is the Krampus all sewn up- 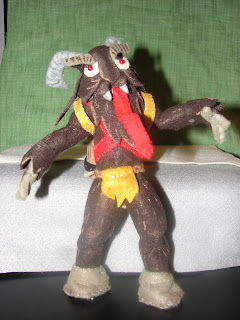 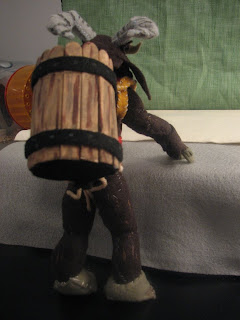 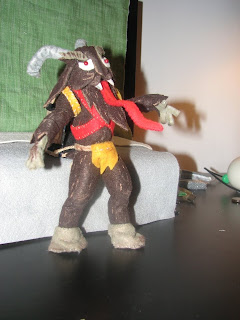 His head is removable, incase I wanted to make more heads for him doing different things. The pupils and tongue are also removable and held in place with quilting pins. His hands I crafted out of very thin armature wire- and super glued felt around each finger. A note on the super glue. Wear rubber gloves. They mean it when they say it's skin binding. Also, it bleaches the fabric. I fixed that with dabs of paint where it was noticable. After I was done building him I made his backpack basket, to hold the bad children. the pack straps are pinned on near his arm pits, so they can't be noticed. Popsicle sticks made a good basket, then painted with a couple different browns, and a black ribbon on the top and bottom- with specs of grey to look like nails.
Up next, Santa! 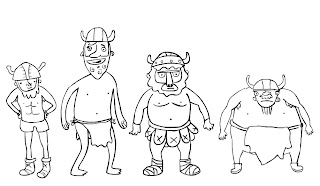 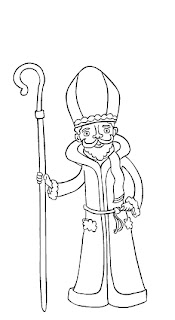 A young st.nick. Keep in mind- he's going to fight the Krampus.
Hmm. Fabulous fighting costume beneath the robe. Spandex? I think I may consult an american apparel ad for this bit. 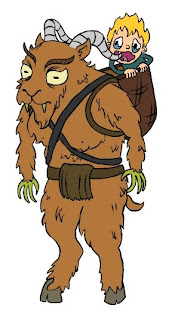 For the past few years Justin and I have been making animations to share around christmas time (he writes the music, I do the art thing). This year's topic : the Krampus.
According to legends from the Germanic Alpine regions, the Krampus was essentially St.Nicholas' evil twin. He carried whips and chains, giving all the bad children what they had coming to them.
In our version he eats kids too.
This is an early drawing of my Krampus- note, he also has a really long tongue. But that's inside his mouth. So you can't see it.
Posted by Sunny Day Print Co. at 6:33 PM No comments:

Swell Artists (and my page too)